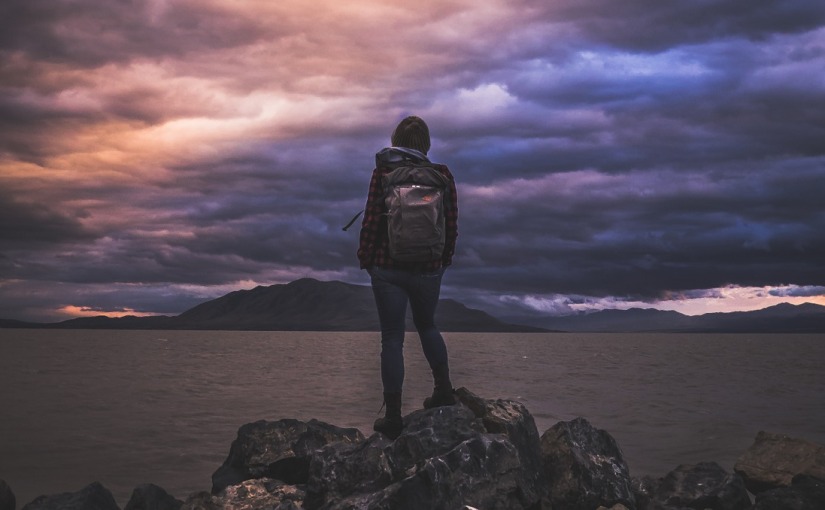 My sunglasses didn’t hold the brightness away as much as I’d hoped, the lenses more reflective than dark. The sun reached through breaks in the trees, always finding me. The air seemed thick. Damned humidity. My t-shirt sucked against my back and shoulders. The little burst of air reaching my skin when I pulled the shirt away felt more teasing than relieving. I strayed off the trail, kicking at fallen leaves and pinecones. The rain from last night made the dirt smell, not clean… Fresh maybe, the way newly cut grass gives off a strong, pleasant odor. Birds I could hear but not see let out loud chirps, argumentative sounds. I glanced at my watch for the third time.

Four minutes after two. She’s late. Would I lose my nerve if Dani took too long getting here? Maybe. Oh, it’s easy enough to lie—innocent little falsehoods that roll off the tongue. Lies are just another necessity. Still… It’s harder to lie to a friend, necessary or not. Somehow I knew this lie wouldn’t roll quite so easily.

“McKayla,” Dani called as she walked along the trail. She stalked down to where I had strayed, her hiking boots kicking up the moist earth. “Thanks for agreeing to meet me out here. I didn’t want to break my new hiking schedule. Twenty-one days can make or break a habit and all, and I definitely need this whole,” she waved her hands around to encompass the trail and forest “fitness-hiking thing to be a habit.”

If she needed it to be a habit, it was for her own peace of mind. Dani was about 5’7 and had a dancer’s physique, all long limbs and lithe form. She also had no rhythm, couldn’t help being clumsy, and was terrible at sports. Bit of a science nerd, if you ask me. I smiled, couldn’t help it. I gestured for her to keep walking the trail.

“So, what did you want to talk about?” she asked, prodding me forward with a rib poke.

“I’m moving,” I said, which was true. I scratched my left palm with the pinky finger. The words in my head didn’t match the words vocalized. I have to get out of the country translated to “I got a job offer in Munich.” I’ll be leaving in five hours became, “I’ll probably be leaving sometime next week.”

Dani didn’t know I worked for Interpol. She didn’t know that Jerry Laughlin, one of the most wanted men in America, had been spotted in Venice. Didn’t know that I had to meet with various MI6 and CIA associates for a briefing. Munich was an easy lie. It’s not that working with Interpol was something I needed to keep secret, but there are often aspects to the job that shouldn’t be brought home. Or around friends and family. It’s best to avoid admission altogether.

Dani stopped, pulling my arm to stop me; a good thing, because my feet threatened to carry me to a galaxy far, far away. She let go, dropping her hands to her sides, flexing her feet.

“When did you find out? I didn’t even know your company extended that far,” Dani said.

“It’s not my company Dani, I just work there. And it’s kind of a new deal they have going,” I said, glad of the sunglasses masking my eyes. Glad of the heat making me sweat. Yeah, the heat. Dani trudged onward, leaving me to catch up.

“McKayla…” she said when I elbowed her in the side.

“Don’t worry. I doubt I’ll be gone too long. I just have to train another exec and then poof, my job there is done. So, really it’s like an extended vacation,” I said confidently. Maybe we’d find Laughlin by then. I doubted it. The man was sixty-something now, the top target in a corrupt FBI case from a few years back, but he couldn’t be found. When Laughlin disappeared, he really disappeared. Gone.

“I’ll call you every day if it will make you feel better,” I said to Dani.

“I don’t know about that. Better make it every other day,” Dani said, a bite that I’d never heard before crawling into her voice, a coldness into her eyes. “Absence makes the heart grow fonder, as they always say.”