Messing with Your Head

Hallo, you sweet, sweet darlings. It’s been almost a week (or has it been more than that?) since the last author interview. Life, you know, gets a bit distracting. But, I’m here now. And with Dave, as well. Of course, Dave is excited to be back. Dave is excited about everything.

Today’s interview is with CJ Harter, author of Rowan’s Well and Fitful Head.

Rowan’s Well is a suspense/thriller garnering high praise. It has been called, “A sophisticated, compelling thriller.” Fitful Head, a horror, has likewise gained positive reviews. Caroline England, author of Beneath the Skin calls it: “Compellingly readable, Fitful Head is a suspenseful and thrilling ghost story for our times.” 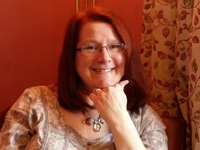 RJ: I want to jump right in with your having dissected human bodies. Can you tell us a little about that experience and how it came about? Did it help as far as research for a particular writing project?

HARTER: This goes back a long time to when I was at Sheffield University. I was training to be a speech therapist and we studied anatomy alongside the medical students. I have never been so afraid before or since as I was waiting to enter the Dissecting Room for the first time. Dissecting a body is a humbling experience. You work on this same cadaver for months and build a strange relationship with the person they once were. At the tender age of 18, I was confronted with the absolute, unavoidable facts of human frailty and death, and that’s character-forming. So while I haven’t yet used what I learned in the DR directly in my writing, that sense of “in life we are in death” influences my work, I think.

RJ: Your first novel was a psychological suspense released in 2013: Rowan’s Well. The book has since received several awards and five-star reviews. What was marketing like for the novel and how long did it take to gain a good readership? Was there any point during the process when you became disheartened?

HARTER: I’m not sure I’ve yet attained what you might describe as a good readership. When I make enough to live off, then I’ll have a good readership, but that’s a long way off. Marketing is a challenge for all authors, I think, but I’ve noticed that having a second book out helps revitalise sales of the first. When I started out with Rowan’s Well, I really had no clue that I even had to market, never mind how to market. As for getting disheartened, we all have our bad days, I guess. I just try to remind myself what a privilege it is to be my own boss and control my own destiny as an indie author.

RJ: Earlier this year you released Fitful Head: A Ghost Story—a horror novel with a bit of a paranormal bent. Did the writing and research for this novel change much from that of Rowan’s Well?

HARTER: I confess to doing little research for either book. The way I operate is to write until I come across something I don’t know about. Then I find someone with expertise in the particular field, interrogate them until they reveal all their secrets, and crack on with the story. You’ll find these unfortunate individuals thanked in my acknowledgements.

RJ: Fitful Head has also been well received, and recently won second prize in Liverpool Writing on the Wall Festival’s Pulp Idol contest. Was the publication and marketing for this novel smoother than Rowan’s Well? Has the increase in book bloggers and Indie promotion sites changed the game a bit?

HARTER: It was smoother in the sense that I did zero marketing for the first book, and so had a better idea of what was expected of me with Fitful Head. The marketing is ongoing. It’s noticeable that sales slacken off if you take the accelerator off marketing endeavours.

Certainly book bloggers are my heroes. So many passionate book lovers out there, busy folk with serious jobs, who willingly and generously give their time to help promote the work of authors they have never met. My latest book launch succeeded through the help of such bloggers. I haven’t yet used any paid promotion sites, concentrating for now on building my mailing list via free giveaways on sites such as Instafreebie.

RJ: Where did the inspiration come from for both Rowan’s Well and Fitful Head?

HARTER: Both started with a single central scene from which I worked back and forwards until the full story took shape. So I’d ask myself: For this thing to happen, what had to go before, and what would be the consequences of it?

For Rowan’s Well, I was sitting alone on a beach watching a man carrying a small child … well I won’t say what he was doing. You’ll just have to read the story. Suffice to say, it was a “what if” moment. With Fitful Head, I’d decided I wanted to write a ghost story and was sitting in my living room, in uneventful English suburbia, looking out of the window at my neighbour’s house across the way. I thought: what would be the creepiest thing that could happen right here, right now? And away I went.

RJ: You aren’t just a writer, you’re an instructor offering classes to new writers. Can you tell us a bit about these classes, including when and why you started them? Do you plan on expanding the curriculum?

HARTER: I teach beginners’ creative writing for local adult education programmes and freelance with my own students. It’s just a few hours a week, so fits well with the writing and book-marketing. I started after I gave up a full-time, well-paid job that I loved so I could focus on writing, which I love even more. The thing I missed most about my job was the teaching and training element, so a friend suggested I combine my two loves and go freelance.

I love helping people connect with their creativity through writing, and my long-term plan is to launch online courses so I can reach more emerging writers.

RJ: As you interact with other writers (both as an instructor and on community forums), do you find that certain personality traits line up with certain genre writers?

HARTER: Gosh, what an interesting—and difficult—question! I think there may be a gender divide in the thriller genre. Men tend to go for high-action, highly-plotted stories, while women excel in psychological suspense where motivations, emotions, vulnerabilities come to the fore and the author messes with the reader’s head. That’s probably an unforgiveable generalisation. Apologies to all concerned!

RJ: This is a purely for-fun question: What is the strangest compliment or comment you’ve gotten on your writing and/or creative ideas?

HARTER: One reviewer of Rowan’s Well advised readers never to go swimming with me. If you’ve read the book, you might agree with them.

People who know me—or think they do—often express surprise that I write such dark stories. I’m quite a sunny personality … outwardly.

RJ: Are you already working on another novel, or have an idea that might eventually become your next novel?

HARTER: I’m trying to fall back in love with some characters I’d started writing before I began Fitful Head. It’s another psychological suspense, and it’s possibly another ghost story. Not sure yet.

RJ: What advice can you give to new authors?

HARTER: Do not wait for inspiration. It doesn’t come to you. You have to go to it. Do not get a dog, and if you do, content yourself with just the one. Dogs are the enemy of protected writing time (but I love you deeply nevertheless, Riley and Minnie). Do not let anyone tell you how and what you should write. Your heart already knows what you want to write. 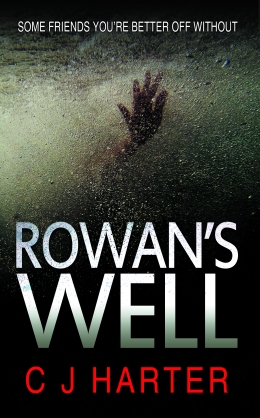 Available in eBook and paperback formats on Amazon.

Available in eBook and paperback formats on Amazon.