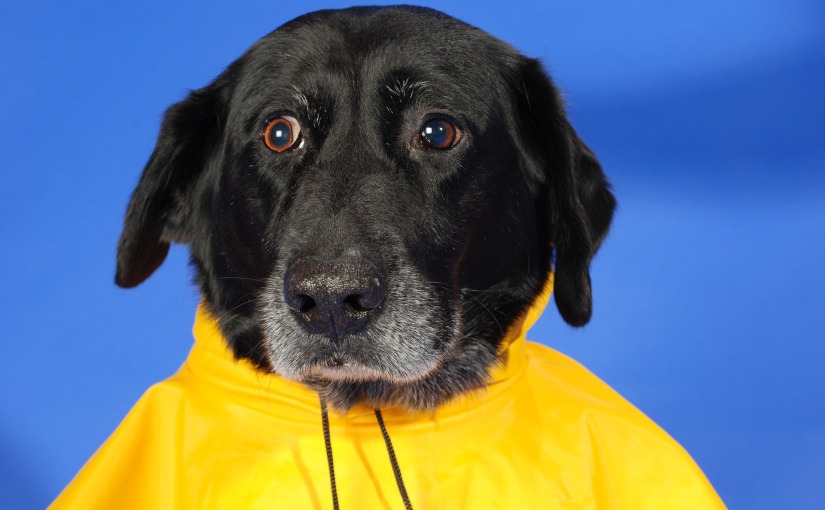 This article by Jennifer was originally published on FOMO Bones.

Batten down the hatches, draw the curtains—there’s a storm about to hit and the forecast isn’t looking good (especially for Fido). Hiding, whining, scratching, peeing—these are just some of the symptoms of a dog suffering from “Thunder Phobia,” a condition that typically begins between the ages of two and four, and which gets worse over time. But no matter how long your pup’s panic has been in full swing, the following top tips should soon soothe his jangling nerves.

Why are Dogs Scared of Thunder Storms?

Vets and animal behaviorists have studied this topic to the -nth degree, yet there’s still no concrete answer. The consensus is that the noise of the thunder and the flashes of lightning are unpredictable and, to a dog, seemingly come out of nowhere. However, there’s also the complexities of how dogs are hardwired to pick up on changes in air pressure and to hear the super low-frequency rumbles of a storm before it arrives. Another hypothesis is that dogs may even suffer from shocks, as static electric builds up as a thunderstorm approaches. Herding breeds (such as Border Collies) are especially affected, as well as naturally nervy dogs who are anxious in everyday life. Whatever the facts of the matter and actual root cause of their fear, there are tactics that can help. And here they are…

First thing’s first—you should always be aware of the forecast if it seems that bad weather is swirling overhead. Getting caught outside in a storm can be incredibly stressful for your dog (and you can multiply that by ten if they also hate getting wet). All in all, it can serve to worsen their already serious fear. Launch into some positive association training with the help of a downloadable thunder storm app or soundtrack. Over the next two weeks, play the storm audio at increasingly louder levels, and while doing so play with your pup and feed him treats. Once you switch off or pause the audio, stop all play and all treats—the point here is to link the sounds of thunder with tail-wagging happy times.

You may have trained your dog to sit, lay, and maybe even shake hands. But what about training them to settle down? This isn’t nearly as impossible as it sounds. Simply put on a special “inside” leash and direct your pup to lie at your feet, rewarding him when he follows your instruction. Practicing this routine all year through can ensure that your pup has a reassuringly regular cue to follow, even as the thunderous rumbles begin.

Do as much as possible to lessen the effects of a storm by getting the basics covered—that includes drawing the curtains, having a TV or music on medium-to-loud, and creating a cozy hideaway complete with overhead blankets and plenty of pillows. You should also observe your dog during a storm—is there a place he tries to gain access to, such as a bathroom, office, or basement? If possible, try and prepare this area with his blankets. Over the course of the storm try to keep your pup engaged with treats, training, and toys where possible.

Swaddle that Pup up like a Real Human Baby (kind of)

Not so long ago a product hit the shop shelves that claimed to calm the nerves of our canine mates. It was called the Thundershirt—a type of tight dog jacket that provides an experience of pressure and closeness. It works in the same way as swaddling a baby—reminding them, on a subconscious level, of being in the womb. You can create your own DIY version of this jacket by purchasing a suitably sized human t-shirt and placing your dog’s front legs in the arm holes. If you get the sizing right, this should provide at least a partial sensation of pressure.

Give the Dog a Bone (but not just any old bone)

Nope, we’re talking CBD dog treats (CBD standing for cannabinoids). Contrary to common misconceptions, CBD is nothing to do with recreational cannabis. It’s simply derived from the same family of plants—namely hemp (the plant material that’s used in everything from clothing to cosmetics). CBD dog treats are proven to relax, ease anxiety, and calm even the cagiest of canines by interacting with the endocannabinoid system, which is in charge of physiological reactions including appetite, pain-sensation, mood, and memory.

So effective is CBD, that it’s even been shown to help with a multitude of other dog conditions, including skin allergies and dry, itchy skin (you can thank the high content of Omega 3 fatty acids for that); as well as easing seizures and epilepsy, and even overcoming low energy.

If Eddie the English Springer was in the eye of the storm with a FOMO Bone in his mouth, he’d be a whole lot less stressed.

Author bio: Jennifer is the voice behind the FOMO Bones blog. She’s pretty sure she was a Great Dane in her past life, but her team at FOMO pegs her as more of a Labrador. Regardless of her breed, she’s a dog enthusiast with 15 years’ experience training dogs and owner.